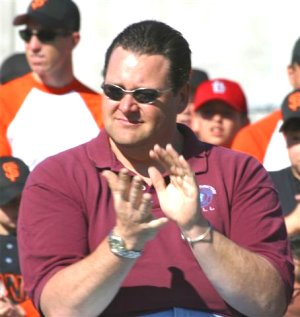 Michael Galindo passed away suddenly in San Mateo on May 5. He is survived by his wife Kimberly, his three sons Christopher (17), Kevin (15), and Corey (13); his parents Ruth and Jerry, his brother Patrick, sister-in-law Bee, nephew Jake, and many other beloved family members and friends.

Mike grew up in Daly City, graduating from Serramonte High School in 1979. He attended the College of San Mateo, earning his A.A. Degree in Administration of Justice in 1983. Mike and Kim met in 1982, when they were both cadets in the San Mateo County Sheriff's Search and Rescue Explorer Post. They were married in 1984, and moved to Concord in 1989.

Mike served for over 22 years with the Daly City Police Department, working in the patrol, detective, street crime, and community policing units, finally rising to the rank of Lieutenant in 2001. He was the recipient of numerous departmental commendations and letters from grateful citizens. Mike was a graduate of the Sherman Block Supervisory Leadership Institute, and later became a facilitator in the program, which emphasizes ethical decision-making and integrity. He was instrumental in bringing the "Every 15 Minutes" anti-DUI program to Daly City. He was a true mentor to others and a great teacher throughout his career in his roles as a field training officer, rangemaster, police academy instructor, and instructor in San Mateo County's Inner Perspectives program, which teaches leadership principles to police officers. Mike was also a past president of the Daly City Police Officer's Association, and the treasurer of the Daly City Police Athletic League. His accomplishments in law enforcement are too numerous to mention individually, but can be summed up by saying that he was a good cop and a true leader.

Mike was also a teacher and mentor off the job. He was a beloved coach of many successful soccer, baseball, and basketball teams. he had been a board member of Concord American since the early 90's. His coaching expertise is evidenced by his sons Chris and Kevin, who are now varsity baseball players for Concord High. Mike was in the middle of a wonderful winning streak with the CALL Junior Cardinal team that Corey plays for. He was selected as the CYO Basketball Coach of the Year while coaching for St. Agnes in 2001-2002.

Mike touched many lives through his work, his coaching, and his community involvement. He was a man of strong beliefs and opinions, which he always expressed respectfully and with an open mind for the beliefs and opinions of others. He gave one hundred percent effort to whatever he did and, more importantly, was able to influence others to do the same. He was the best husband, father, and friend anyone could ask for. Words cannot express how deeply his family, colleagues, and friends will miss him.

Visitation will be held on Wednesday, May 11 at 6PM with a Rosary at 7PM at St. Bonaventure's Church, 5562 Clayton Road, Concord.

The Funeral Liturgy will be celebrated on Thursday, May 12 at 1:30PM at St. Bonaventure's, with interment at Oakmont Memorial Park, 2099 Reliez Valley Road, Lafayette to follow.

A reception following the interment will be hosted by the Daly City Police Officers Association at Zio Fredo's in Pleasant Hill.